Nutra Life Keto is a weight loss supplement designed to be used in conjunction with the low-carb ketogenic diet. It contains ingredients that can help make all aspects of ketogenic weight loss more effective and more comfortable to live with.

The product itself comes in capsules, and each bottle contains 60, which is a 30-day supply.

Nutra Life Keto contains gelatin, an animal by-product, which means this supplement is not suitable for vegetarians or vegans. It’s made by a company called NLI. 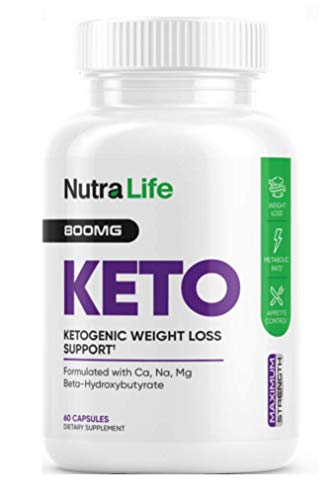 out of stock
Check Price
Amazon.com

What are the Ingredients?

Nutra Life Keto contains several different ingredients, although it’s unknown how much of each this product provides. That’s because they are contained within a proprietary blend. Manufacturers use proprietary blends to keep their exact formulas secret. However, it also means users cannot know precisely how much of each ingredient they’re ingesting.

The active ingredients in Nutra Life Keto are:

The first three ingredients are exogenous ketones. That means they are ketones from an external source. Your body manufacturers ketones from fat during low-carb diets. Your body can then use ketones for energy and other metabolic processes.

Caffeine anhydrous is simply caffeine powder. Caffeine powder will give you energy, increase mental focus, and is also a potent fat burner.

How to use it Correctly

Nutra Life Keto is very easy to use. According to the manufacturer, you just take two capsules once per day. There are no guidelines as to what the best time is to take this supplement.

However, because it contains caffeine, users should avoid using this supplement too close to bedtime as it could make sleep hard to come by. Arguably, the best time to take Nutra Life Keto is first thing in the morning. However, exercisers may benefit from taking it 15-30 minutes before a workout, as it should provide a noticeable boost in energy.

Benefits of using it

The ingredients in Nutra Life Keto will have the following effects and benefits:

Faster descent into ketosis – getting into ketosis takes time, anywhere from a few days to two weeks, depending on how much carbohydrate you have in your body. The exogenous ketones in Nutra Life Keto will artificially raise your ketone levels so that you enter ketosis sooner.

Shorter, easier ketogenic flu – the process of getting into ketosis is often accompanied by several unpleasant side effects, collectively called the keto flu. These include headaches, cramps, nausea, diarrhea, constipation, insomnia, hunger, and brain fog. Because the ingredients in Nutra Life Keto help you get into ketosis faster, you should experience shorter, easier keto flu.

Increased energy – on the keto diet, your body doesn’t have carbs for energy, so it uses fat instead. Unfortunately, fat is something of a slow burner. To remedy this problem, your body turns some fat into ketones, a much faster-acting energy source.

The ketones in Nutra Life Keto and the ketones produced by your body are the same, which means the exogenous ketones in this supplement can boost your energy, despite not containing any calories.

In addition, the caffeine anhydrous in this supplement provides you with a secondary source of energy.

Faster fat burning – taking exogenous ketones tricks your body into making more ketones itself. Ketones are made from fat. Subsequently, this supplement can help speed up fat burning. Caffeine anhydrous is also a potent fat burner that increases metabolic rate and energy expenditure.

Less hunger – hunger can make any diet harder to stick to, even one as popular and effective as keto. Exogenous ketones are known for their appetite-suppressing effect. Combined with more stable energy levels, this should mean you suffer fewer cravings and less hunger when you use Nutra Life Keto.

The ingredients in Nutra Life Keto are certified GRAS by the FDA, which means they are “generally regarded as safe,” and should not cause any significant side effects. That said, some users may experience a mild reaction to the ingredients and develop the following symptoms:

In most cases, the cause of these problems is caffeine. While it’s unclear how much caffeine Nutra Life Keto contains, it’s a good bet that it’s at least 150-200mg, which is the equivalent of two cups of coffee.

Side effects can be avoided by not consuming Nutra Life Keto at the same time as coffee, tea, cola, or hot chocolate, all of which contain caffeine in abundance. Caffeine-sensitive users may also benefit from dividing their dose into two, separated by 6-8 hours. This will avoid any potential caffeine overload.

Finally, the manufacturers recommend not exceeding two capsules per day. Doing so will increase the risk of side effects but won’t increase fat burning.

The ketogenic diet is one of the best weight loss eating plans around, but it can also be one of the hardest to live with. Side effects are common, and a lot of people don’t make it past the induction phase, after which things get a whole lot easier.

Nutra Life Keto is designed to make all aspects of the ketogenic diet easier and more effective. The exogenous ketones are chemically identical to those manufactured by your body, so they can be used for energy and a host of other useful chemical reactions. The caffeine will also provide you with a welcome boost of physical and mental energy, as well as enhancing fat burning.

It doesn’t matter if you are just starting out on keto or are a keto dieting expert, Nutra Life Keto is made to make all aspects of low carb dieting more effective and easier to live with. Think of it as your secret weapon during your low carb diet.

Deciding if this is the right supplement for your diet is easy with our detailed review.

We collect information from many stores for best price available